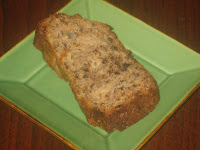 I found time to get in touch with Robert Shimmin concerning my banana bread yougurt substitution experiment [2]. If you followed that link, you’ll notice it takes me to my domain instead of the normal blogspot address. Now that I’ve gotten going with this blog, I’ve realized I really should have had it at my own domain and using wordpress software instead of blogger. So in an effort to minimize my correction of links, I’m going to start pointing you over there. The theme or layout is ugly, and in my computer dorkiness fashion, I’ve decided to code my own theme, so that’s in the works and I’ll soon be back to my black background and a better layout.
Back to the experiment, Robert explained the science perfectly, so I’m going to quote his answer to my original question. When baking and substituting yogurt for sour cream, why it suggested to add an extra tsp of baking soda per cup of yogurt?

You add extra baking soda to the yogurt because yogurt is more acidic than sour cream, and so you’re adding some extra base to balance it out.

Details: Whole milk that hasn’t been homogenized will separate into milk and cream. Cream is the fat rich phase, milk is the water rich phase. Milk sugars are water soluble, so they mostly stay in the milk. (If you’re curious, look at the nutritional info on cream sometime. Not much sugar in there.)

Whole milk yogurt is a good baking substitute for sour cream. Low-fat and nonfat yogurt is a brand-by-brand experiment, because I have no clue which of the various thickening agents used in them stand up to the oven.

And there we have it. My results of course weren’t as I expected. Isn’t that always the way with science? So I have a few theories on why it went wrong. First and foremost though, what went wrong. 1) The batch with extra baking soda did not rise as well. 2) The batch with baking soda tasted like soap. Well not awful, but had soapy backnotes. It’s possible that the original recipe is wrong and had too much baking soda to sour cream ratio or that my oven is funky (messing up the rise – in retrospect whenever I make 2 zucchini breads, one always rises a little better), but at the end of the day, in this recipe, if you sub the sour cream for yogurt, leave the baking soda alone. Also, I used 1% fat yogurt – Mountain High brand – and that held up. The normal 1 tsp of baking soda tasted great.
Did you ever wonder how the original cooks came up with bread baking in the first place? I think about that every single time I bake. Cooking seems fairly intuitive to me, but baking, really? Hmmm… I guess I’ll throw some of these flours and sugars and fats together and tweak it until the whole is better than the sum of it’s parts… I am awed by the original bakers.