Cheapest Drugs Online. Buy Cheap Drugs Online Without Prescription. Our Drug Store Presents High Quality Pills. Anyone Would Really Like To Buy Genuine Within The Drug Store At Home Below https://primature.gov.rw/levitra-online-without-prescription/ [1] Simply! Yes You Have Right To Remain Benefit From The Purchase. 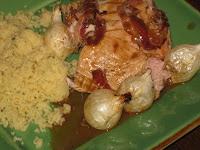 I am suffering from a severe lack of creativity over here. Maybe it’s because it was my birthday last week, maybe it’s because my husband’s been sick, maybe I’m just bored. In any case, I’m feeling to lazy at the moment to really whip up any of my own inspired meals. On the upside, sometimes it’s good to simply follow someone else’s recipes because you learn things you can incorporate into other dishes later.
Tonight I’m making a pancetta wrapped pork loin [3] I found on Martha Stewart’s website. Martha actually has a couple of versions of the same thing on her site, but this is the one I liked the best. The little onions for example, unpeeled? Really? I was anxious to see how they turned out and really shocked to see them on the serving platter. Are they just for decoration? Edible? Do they turn out like roasted garlic, all squishy in the center, good on toast? (They looked cool, and peeled like roasted garlic, but tasted kind of bleh, IMO.)
I also like the sauce base for this recipe, used in place of a roux. Equal parts of fat and flour used to thicken broth. But instead of cooking the fat and flour, then adding the liquid, you’re adding it after reducing the liquid. It should thicken and make a nice basic sauce. (Sauce had great color and was a very nice addition. )
Of course everything seems to be thwarting me these days. The grocery was out of rosemary. I thought about emailing some friends to ask if anyone had an out of control rosemary bush I could pilfer a few branches from, but instead trucked it to another grocery store. I’m frustrated that I don’t have a real outdoor herb garden. I used to have one, but somehow, my life got stuck on permanent pause when I moved here, and I just can’t manage to get a life plan together and actually start living instead of merely planning, debating, pondering, then starting the vicious cycle all over again. And I hate my kitchen. Perhaps I should go back to work so I could buy myself a nice kitchen. Of course than I wouldn’t have any time or energy to use it. Yet another conundrum. Ack. I promise to try to be back on top of the world tomorrow.
The recipe is definitely pretty. But as for basting with the juices, mine had no juices. Of course, my pancetta was a little thin as it was the prepackaged stuff, since the neighborhood grocery doesn’t carry it in the deli. If it were thicker, I am certain it would render more fats and juices. Even without basting, the end result was very good. I give the recipe a very high ranking.
1.5 lbs boneless pork center loin
kosher salt
fresh ground pepper
olive oil
2 tbsps finely chopped fresh rosemary, plus several sprigs
1/3lb pancetta or bacon, thinly sliced
10-12 small pearl onions, unpeeled
1 tsp butter, softened
1 tsp flour
1 c. chicken stock
Preheat oven to 375 degrees. Season pork with salt and pepper. Heat oil in a large cast-iron skillet over medium heat. Sear pork on all sides until browned, about 10 minutes total. Remove from heat.
Rub pork with chopped rosemary. Wrap with pancetta, overlapping strips slightly. Use toothpicks to secure pancetta, if necessary. Place a rosemary sprig on top; tie pork with kitchen twine, and remove toothpicks. (I didn’t use twine or toothpicks, a benefit of using very thinly sliced pancetta) Return pork to skillet. Scatter onions and rosemary sprigs around pork. Roast in oven, basting occasionally with cooking juices, (see above concerning my results) until it reaches an internal temperature of 140 degrees on an instant-read thermometer, 30 to 35 minutes. Remove from oven. Transfer pork and onions to a platter; cover to keep warm.
Make pan sauce: In a small bowl, combine butter and flour. Place skillet over medium heat. Add stock, scraping bottom of skillet to loosen browned bits. Bring to a boil; reduce liquid slightly, about 2 minutes. Whisk in butter mixture; cook until thickened. Season with salt and pepper. Slice pork, and drizzle with sauce.