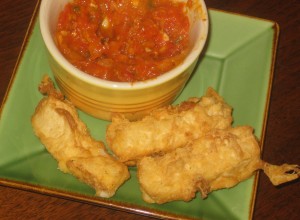 A few months ago we had dinner at a restaurant here in Dallas called The Porch [1].  Our friends ordered the fried cheese appetizer.  I am all about fried cheese, any time, any place, any cheese.  But this was truly exceptional.  We all agreed, and I vowed to attempt a home re-creation.  The menu [2] lists the appetizer as Fried Port Salute Cheese and Red Pepper Marinara.

Out of the box on my first attempt, I’m pretty pleased.  The marinara was killer – even though mine doesn’t actually have red pepper in it.  It’s probably cost prohibitive unless you grow your own tomatoes.  Not that it was crazy expensive, just due to the labor and the quantity of sauce you get as an end result compared to the wide availability of marinaras at the grocery.  That said, I felt very Italian, warm and fuzzy making my own.  I’m planning on making chicken Parmesan later this week, and my thought was that this recipe would yield enough sauce for both.  It turned out to be quite a bit less than I imagined, but this recipe as it stands would be enough for four chicken parmesans.  Or if you’re making it for this, probably 3 generous ramekins of sauce.  The batter was good, but could have stood to be a little thicker, one of my sticks got a hole, leading to all my cheese spilling out, leading to messy oil.  But 1 casualty on a first time experience is not too shabby.

Port Salute cheese [3] was originally made by a group of French monks in the late 18th century.  It’s softer than gouda, softer still than fontina, and has a very mild flavor.  Possibly I’d call it a little firmer than a brie, but with less of a wine taste.  It’s amazing.  And hard to find.  But I found it and turned out this attempt.  Incidentally, John said his mother mixed Port Salute with butter then kept it around for garlic bread spread, which sounds sinful and delicious.

I chose to fry in safflower oil because of it’s suitability for high heat cooking – stable up to 445 degrees.

Heat safflower oil in a heavy bottomed pan until 375 degrees.  Chill cheese sticks in freezer for 10 minutes prior to preparing.

In a small bowl, combine flour, eggs and water with a whisk.  Dip cheese sticks in mixture to coat, then drop into hot oil 2 at a time, letting fry until lightly browned on all sides, turning as necessary.

11 tomatoes on the vine

Leaves from 6 sprigs of fresh oregano

In a large pan, bring water to a boil.  Core tomatoes, and score an X on the skin of the opposite side with a paring knife.  Drop tomatoes in boiling water for 1 minute 10 secs, then immediately remove to a bowl of ice water.  The skin will now peel easily from your tomato starting from your X.  Quarter tomatoes. Pour out your boiling water.

In same pan, warm 5 tbsps olive oil.  Add garlic and shallots, cook for 2 minutes on medium high, then add tomatoes.  Cook on medium high for an hour covered, stirring occasionally and squishing your tomatoes with a wooden spatula.  Remove lid, stir, add wine, herbs, and 1 tsp salt, and 8 turns of pepper.  Cook on low heat another half hour, then taste and adjust seasoning if needed.