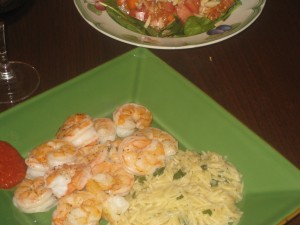 Ina Garten, aka Barefoot Contessa [1], is kind of my culinary hero.  I like so much of what she does.  Last December I saw an old episode of her show on the Food Network doing a Roasted Shrimp dish.  We’ve always been boilers of shrimp, but I had to give my hero’s way a shot.  I’ve only attempted this twice, but both times I’ve been thrilled with the results.  I roast mine quite a bit longer than she does, but I like almost all my seafood well done.  It possibly has something to do with the fact that it took me a nearly a quarter of a century to even eat seafood at all.  I’ve grown up going to the ocean, but I have the smallest little issue with my food resembling the animal it came from.  I know weird.  Most people forgo red meat or pork.  Me, I skipped the whole seafood category.  But when you love food and the beach like I do, eventually you have to cave.

By nature I’m a little bit of a pacifist.  I don’t really like to kill anything, even bugs, but I found my brief vegetarian phase very unfulfilling.  Plus, since gestational diabetes and family history have left me with a 50% chance of diabetes later in life, I think meat is always going to be an important part of my diet.  Seriously, I wonder what happens if you’re a life-long vegetarian and you get diabetes?  I really don’t know how you could ever get your blood sugar in line.

My sous-chef, or husband, made our cocktail sauce from a 50/50 mixture of ketchup and chili sauce, with a ton of horseradish and a bunch of fresh lemon.  I’ve been reading about homemade ketchups, and I will soon be working on that once I can decide which direction I want to go from the hundreds of recipes I’m reading.  I’ll post on that soon, and hopefully that will be the jumping off point for my own cocktail sauce, barbecue sauce and a host of other sauces all made from raw ingredients.

In Austin I used to be able to find frozen uncooked peeled and deveined shrimp, which definitely cuts down on the labor involved in a shrimp meal.  I haven’t seen them in Dallas, but that doesn’t mean they aren’t here, I probably haven’t looked very hard.  These were fresh 20-24 shrimp per pound Gulf of Mexico White Shrimp.  Delicious!  This amount serves 3 nicely or 2 adults and 2 kids.

Preheat oven to 400.  Place shrimp on a cookie sheet in a single layer.  Drizzle with olive oil and sprinkle with salt and pepper.  Shake to coat.   Cook 12 minutes, until curly, pink, and opaque.

juice from half a lemon

3/4 of a tsp Murray River Salt