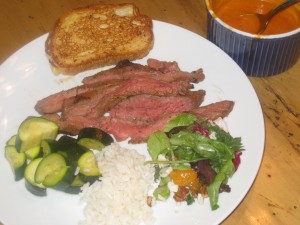 I tend towards a from-scratch style of cooking.  One because I enjoy the process so much and two because I know each and every ingredient going into my meals.  Since I’m visiting with family, I’m going to be highlighting a lot of other people’s best dishes this month, in addition to my own creations.  This flank steak is one of my father-in-law’s staples.  I’ve written about my flank steaks here [1] and here [2].  Well, technically, that second one was about a London Broil that should have been made with a flank steak.  As far as the Top Round London Broil goes, if you are really pinched for cash, this french dressing marinade, would be a much better way to go than the marinade I used in that post.  These flank steaks turned out ridiculously tender and flavorful.  I would add my herb sauce another time, but FIL’s French Dressing was good and very simple.

FIL marinates the flank steak in bottled french dressing for 24 hours.  Then he cooks the flank steak on the grill.  Ours was a tag team effort as he was on pickup duty to the airport for some delayed family members.  He marinated, then brought the flank steak to room temperature, then I ran the grill.  His fancy shmancy grill has a built in thermometer which I tried to keep right around 400.  I let the excess marinade drip back into the pan then grilled the steaks turning 3 times to make the criss-cross grill pattern.  I cooked to an internal temp of 135 then let the steaks rest 10-15 minutes before cutting against the grain.  We then used the marinade reuse method of boiling the french dressing on the grill for 10 minutes, then serving it as a dipping sauce.

We’re also trying to use the grill as much as possible, so I cooked the zucchini in the grill as well, using a foil boat I fashioned for them.  Some people grill vegetables in foil packets, I’m partial to roasted veggies so I left mine open.  I seasoned them with my usual salt, pepper, and olive oil.  I cooked them in a closed grill on the warming rack (I think that’s the propper term) above the grates for 15 minutes.  Then I moved the boats down to the grates and kept them in a closed grill on medium/400 for another 10 minutes.  I’d thought about just using the cast iron skillet direct on the grill, but with the multiple pounds of flank steak we were cooking, there just wasn’t room.

In case you were back for my review of the Park City Farmers Market today, I’m in the process of working on it and I’ll put it up later tonight or tomorrow with the results of my garlic scapes!