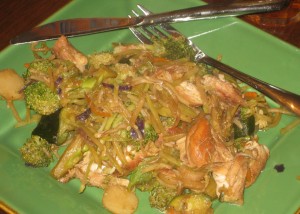 So the thing about Asian food, and I’m sure this is one of those foot-in-the-mouth remarks, is back when I had gestational diabetes, I couldn’t pass my blood sugar after a meal at an Asain restaurant to save my life.  Even when I thought I was making good choices.  Now – the same can probably be said about restaurant eating in general, but I felt a particular hardship with Asian food.  Which, you know, scared me since my endocrinologist was all – “Your body can only produce so much insulin and once it’s done it’s done.  So you really should life long watch your sugars -lest this finger pricking and diet minding become your everyday existence.”  For those of you who *don’t* know me in person, I have absolutely ZERO risk categories for gestational diabetes and was totally floored by the diagnosis.  Consequently, I took this way more seriously than I probably should have.  And heaven knows I love an experiment, so I almost wish I could have tested my blood sugar after this meal, cause I’m betting, forgoing the rice and all that I could have passed.

On the other hand, if you find yourself to be among the 15 or so percent of humans who are salt sensitive – this is probably not the best recipe for you.  We all have something to watch, I guess.

Another nice thing about this meal is that it lies in the QUICK AND EASY category – a category which has been pointed out is sorely lacking here on dinnerandconversation.  Next time, I’d probably swap the zucchini for snow peas.  Personally, I have a love/hate relationship with snow peas, but most people love them and the zucchini disentigrated more than I like.  Also go for fresh on the bean sprouts – everyone in Dallas must have been eating bean sprouts this week because there were literally no fresh ones.  Which totally blows my mind, but I had to use canned.  This recipe also makes enough to feed an army, so be prepared or you know, cut it in half.  I’d say it will generously feed six adults.  The soy sauce marinated chicken is a technique I learned from one of my bestest friends, Marti, way back in the day.  Gosh I miss cooking with you Marti, and miss Austin just as much.  (Working on it…)  Some time when she’s not busy gestating or working or just making the world spin round, I’ll have Marti guest post with her Asian Chicken Salad.  She’s way funnier than me and a truly fabulous chef.

Another Version of a Chicken and Vegetable Stir Fry

2 zucchini, halved lengthwise, then sliced into one inch sections on an angle

Marinate the chicken tenders in a bowl in soy sauce for 10-12 minutes, turning occaisionally.  Heat wok on high heat, reduce to medium high, add 2 tbsps olive oil and chicken tenders in a single layer.  Cook 3 minutes, then turn to cook on the other side another 3 minutes, remove to a plate.  Add broccoli and zucchini ( if using snow peas in place of broccoli, delay adding those for 6 minutes.)  Cook covered for 8 minutes, stirring occaisonally.  Add remainder of soy sauce marinade and bag of broccoli coleslaw.  Cook two minutes, covered, then add water chestnuts, bean sprouts, fish sauce, and hoisin sauce.  Stir, then cook another 1 minute uncovered.  Slice chicken to 1 inch pieces on an angle, add back to veggie mixture, stir, let cook on medium heat 2 minutes and serve.