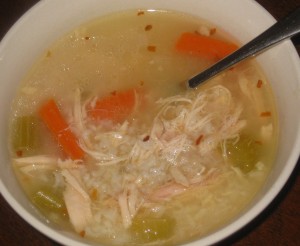 Fall is fleeting, and winter is closing in on us.  One of my favorite things about this part of the year is most people consider it acceptable – even gratifying – to eat soup at least once a week.  National Soup Swap Day [2] will be somewhere towards the end of January.  I’ll be hosting one at my house as usual, so get those ideas pumping.  This recipe diverges from a traditional chicken and rice soup idea with a lot of lemon and a little bit of spice promising an awakening aspect without overpowering.

This recipe is written as I made the soup, which is certainly a time intensive method – but there are several shortcuts you could employ.  If your freezer is home to one of my staple whole roasted chickens [3] minus the breast meat which was eaten at an earlier date, skip the first paragraph and throw your freezer portion in the pan with 2 raw split breasts.  If your freezer is bare AND you’re short on time, use 3 raw split breasts and cook for at least an hour before adding your vegetables if you can – but even 30 minutes will get you started.  When you are lacking a whole or part of a roasted chicken your broth isn’t going to be as flavorful, and there will be more room in your pan.  So cover the split breasts, then when you add the veggies, add 4 cups of chicken stock.  If you have cooked white rice on hand, that would totally work as well, I just like this method since the rice absorbs some of your stock’s flavor without stealing all of the stock thus leaving you with a thick, dry soup.

Now get out there and make some for yourself, and a friend, or just throw it in your freezer in individual sizes to bring you through the winter!

4 carrots, peeled, then sliced lengthwise, then again, then chopped into 1 inch slivers on an angle

Preheat oven to 425.  In a roasting pan fitted with a rack, stuff the chicken cavity with the lemon pieces, garlic, salt and pepper.  Drizzle skin very lightly with olive oil, then sprinkle with salt and pepper.  Roast chicken in oven for just over an hour – if you’re going to eat the breast meat at this point, you’ll need to keep cooking it to a safe internal temp of 165.

Since I’m going to continue boiling mine, I took it to 145, then put it in the stock pot and covered with water.  Bring to a boil, then reduce to a simmer, for 2 hours.  Add celery, carrots, onion, and bay leaves, simmer another hour.  Carefully remove the chicken with turkey forks or a fish spatula, being sure to remove all bone pieces from stock.  Shred chicken meat with two forks, then return to broth.  Add 2 teaspoons kosher salt and 15 turns fresh ground pepper.