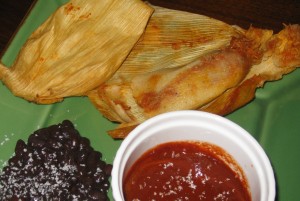 I’ve been wanting to try my own homemade tamales for ages.  A couple of things scared me off initially.  One, I don’t have a single friend who makes his/her own tamales (speak up if I’m wrong).  Two, Lard.  Three, I’d heard they’re complicated and  labor intensive.  And Four, I didn’t own a large enough steamer to get this process going.  I love a challenge, so I’ve been determined to try these despite these concerns, and make them my own.

To address the first issue, I decided to read recipes where ever I could find them.  On the corn husks package (which p.s. is frightening, what in the world would I do with 25-30 DOZEN tamales?), on the lard package, on the masa package, and from my all time favorite resource, Google [1].  All the recipes I came across seemed fairly similar.  I knew I wanted pork filled tamales, so I built my recipe using the techniques and methods from my chimichanga meat [2], enchilada sauce [3], and a hybrid of the things that are required to create a tamale: dough, husks, and a filling.   As for issue number two, I never remember lard in my kitchen growing up.  I think of it as some sort of frightening, old-fashioned, and quite unhealthy ingredient.  That said, I’m also scared of crisco and very skeptical of the Spectrum Palm Oil Shortening substitute one can find at the Whole Foods.  I’m going to give it a shot, but I figured I’d try the original on my first batch.  I’ll let you know my results.  As for the quantity used, it’s about a tablespoon per tamale, so I’m not going to sweat it too much.

Three, complicated -yes and time-consuming – yes.  This one is legit.  An assembly line, might make this more do-able, but unlikely tamales are ever going to appear on a 30 minute meals show.  As for issue Four, Williams-Sonoma had a crazy sale on the All-Clad Multi-pot [4] I’ve been craving for ages.  So I’m now a proud owner of a very large steamer.  And a 12 quart soup pot.  Just imagine how happy that makes me.

At the end of the day, these tamales were insanely delicious.  For a first time out of the box creation, Cory and I were ecstatic with the results.  I encourage you to try them if you’re feeling ambitious.  And if you’re not, arrange a tamale making party with friends so you can all take some home at the end of assembly.  Or come to my house for my upcoming spring tamale event.  However you get them, do.  They are so worth the work and the calories.  Yum.

In a bowl, combine masa, baking powder and salt.  Add in chicken broth, then stir with a spatula to combine.  In a stand mixer, beat lard until creamy, then add masa mixture.  Continue to beat dough until surface bounces back like a sponge, without sticking to your fingers. Refrigerate dough for one hour before assembly.

Pork Tamale Filling (makes a ton, probably enough to make 30 dinner size tamales – but freezable I’ve never seen a smaller pork roast, I guess you could cut it in half before hand, I’ve not tried that yet)

Rinse pork loin and pat dry.  Sprinkle with salt, pepper, and paprika on all sides.  Heat a heavy stock pot with olive oil on medium high, then brown pork loin on all sides.  Cover with water, bring to a boil, then simmer for 2 hours.  Check with a fork to see if pork shreds easily.  If not, continue cooking and test again in half an hour.  When able to very easily shred, remove pork to a bowl and shred using two forks.  Reserve broth for sauce use.

Bring water to a boil.  Add chiles and remove from heat, soaking for an hour.  Cut off stems and rinse chiles under water to remove seeds.  Place chilies in a food processor, then add 1 and 1/2 cups of the soaking water.  Turn on and run until you have a fine puree.

In a skillet on medium heat, warm olive oil.  Add onion and saute 8 minutes.  Add garlic,  oregano, and salt, saute another minute.  Add 3 ladles of broth from cooking the pork.  Cook 1 minute, then pour into a blender to puree.

Return the pureed garlic and onion mixture to skillet.  Add ancho puree, tomato puree and sprinkle surface liberally with kosher salt and fresh ground pepper.  Simmer for 5 minutes then check seasonings and add salt and pepper to taste.  Reserve one and a half cups of sauce for serving and dipping.  Then add shredded pork to remainder.  Stir, then cook another 10 minutes.

Soak corn husks in warm water for about 2 hours.  Rinse.  Spread 75% of the husk surface with a thin layer of tamale dough.  Add 1-2 tablespoons of tamale filling in a vertical line.  You want this to be centered in the tamale with just the edges free of filling.  Roll long edges in to center.  Use right side to squish tamale dough around filling creating a tube with left side of dough, then fold both edges of husk over to form a packet.  Fold bottom edge up, then top.  Place seam side down in a steamer basket.  Repeat.

Cover tamales with a wet dishtowel.  Steam over 2 inches of boiling water, with a tightly fitting lid for an hour and 10 minutes.  Check after 45 minutes to make sure you still have enough water, then check again at one hour.  To check tamales, remove one and gently unfold.  Dough should not stick to husk and should be a very moist, but not wet,  cornbread-like consistency.  Serve two per person, with additional sauce for dipping if desired.  Enjoy!