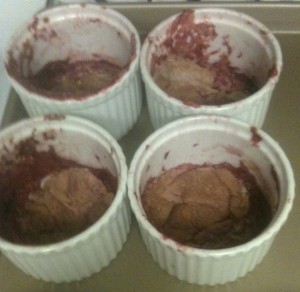 You strawberry souffle, are my nemesis.  Damn it.  I’ve been attempting to make strawberry souffles as a custom dessert order for Kari.  I can count on one hand the things I’ve cooked in the last five years that have been inedible and strawberry souffles count for two of them.  Technically, John and Kari ate these souffles, but I think it was purely out of pity.  I have never seen such a hideous dessert in my entire life!  I can’t figure out what in the heck went wrong, so I’m blaming the recipe.  It simply must be faulty.  They appeared to be perfectly on target, beautiful, puffed, lightly golden, but then pouf.  Classic. Souffle. Failure.  Within 30 seconds out of the oven they turned into the disaster shown here.  Flat, mushy, ugly.

My egg whites were perfectly stiff.  My strawberry puree was gently folded.  The resulting mixture was airy and light and then.  FAIL.  Sometimes these things happen.  I’m not sure whether to quit and never attempt a dang strawberry souffle again, or just keep trying until I master it.  Either way, enjoy my train wreck and have a chuckle at my failed dessert.  Whatever you do, DON”T cook this recipe [1].