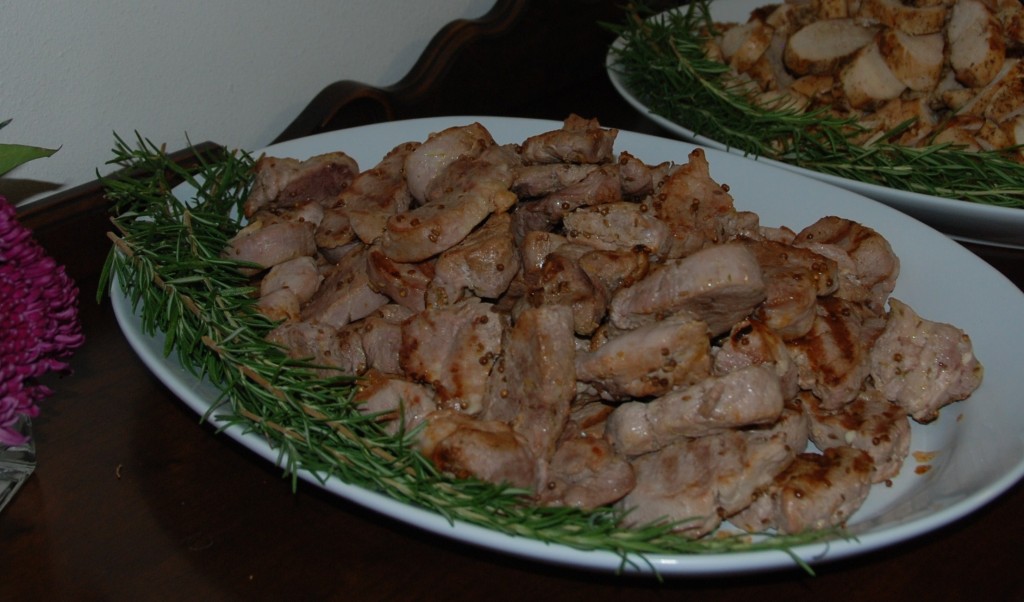 This Seared Pork Recipe came as part of the recipe suggestions from Williams-Sonoma in the Easy and Elegant Dinner Party I hosted for LE’s Fifth Birthday.  I was floored by how much I liked it.  The flavors were really bight and summery, but not overpowering at all.  We served it with my Herb Sauce [1] for a topping, but the pork could definitely stand all on it’s own.  It would be perfect as part of a summer picnic or on sandwiches by the pool.   Another bonus Amelia pointed out, is that pork is often a very hard meat to display on a buffet as it tends to look so bland and boring.  By slicing into medallions and then searing on both sides this pork had a much deeper depth of color.

As a part of the Easy and Elegant Party Package, Calphalon sent me a Unison Slide Nonstick Griddle and Sear Nonstick Grill Pan [2].  The pork was made using the Sear Grill Pan.  If you don’t have a grill pan in your repertoire, you need one.  I have a variety of shapes and sizes.  The bonus of the Calphalon Unison line is that unlike most nonsticks – these *are* dishwasher safe.  I love grill pans for meat, vegetables, breads, grilled sandwiches, anything really.  I think the Unison Grill Pan is perfect for a family.  I most often cook en masse as with the 9 pounds of pork tenderloin in the recipe below.  When cooking large quantities like this, I love my All-Clad Gourmet Double Burner Grill [3].  As for the 9lbs, if I’m serving 2 meats, I go with about a 3 oz serving of each meat per guest.  For this recipe, that yielded about 50 servings of pork tenderloin.

I have to admit, this is my first use of coriander seeds.  I’ve been avoiding recipes with them for years as the seeds are the dried fruit of the plant from which cilantro leaves are harvested.  Cilantro is another love it or hate it ingredient.  Some believe a person is genetically predisposed to love or hate the herb.  I think I was merely shattered by an article in the Austin Chronicle proclaiming that cilantro tastes like body odor smells.  After that description, I had a hard time ever wanting to ingest the stuff again.  Whatever the situation, the coriander seeds have a totally different flavor than cilantro.  Both are a fresh “herby” taste, but I’d call the leaves musky and the seeds light and citrus tinged.  In any case, I’m so glad to discover I love the seeds!   A whole new world of recipes to explore has just opened up to me.

With a very sharp knife, cut tenderloins into 1 and 1/2 inch medallions.  In a small dry fry pan, toast the coriander and cumin seeds about 5 minutes on medium heat, swirling occasionally.  In a bowl, combine toasted seeds with zest, lime juice, olive oil, salt, garlic and onion.  Whisk until blended then pour over the pork medallions.  Use tongs to toss pork in marinade every 30 minutes, up to a total of two hours.

Preheat oven to 375.  Heat grill pan over medium high heat, use tongs to sear pork on each side for 3 minutes each, then place grill pan in the oven for 5 minutes to cook through.  Move to a platter and serve with herb sauce [1].