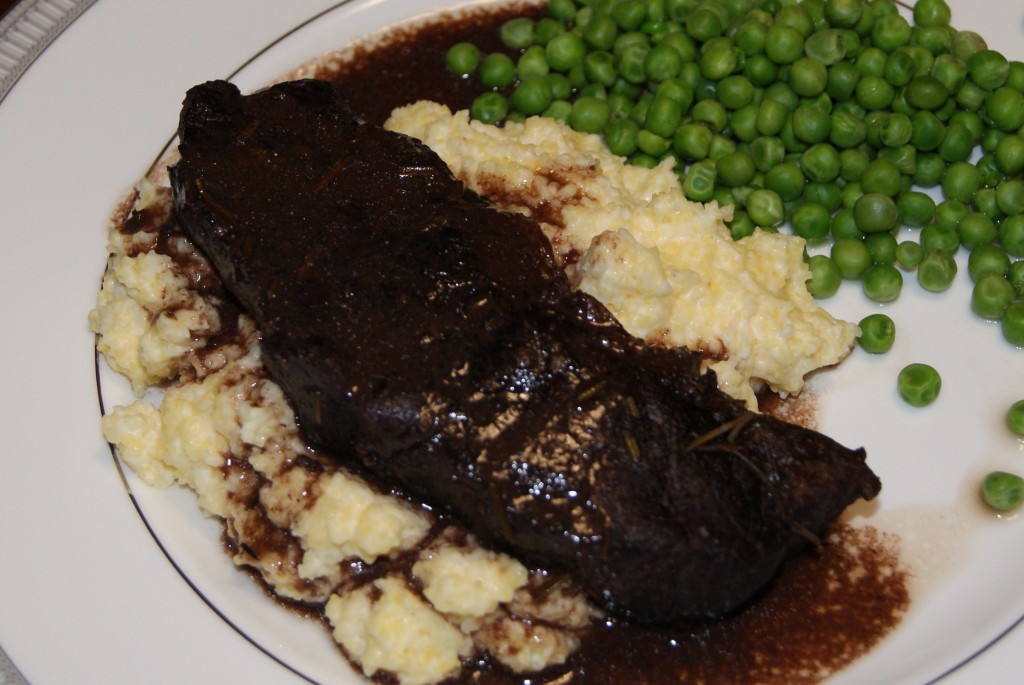 These ribs are so tender and packed with flavor that you might be tempted to drink the sauce straight from a glass.  You certainly will want to add an extra ladle full to your plate.  My recipe is adapted from an October 2007 issue of Bon Appetit [1].  One of the greatest things about this recipe is that it can be prepared almost entirely in advance.  I’m never that organized, but you could be!  I usually wake up one morning and decide it’s a good day to throw a dinner party and go from there.  If you’re looking for a good source for boneless beef short ribs, I always find mine at Costco.  They’re kind of a hard thing to figure out portion wise so here are my tips.  A half a pound per person is a safe estimate for weight, I tend to over do it on food, so I had two ribs per person or five pounds of meat for 6 adults.  Partnered with the polenta and the chocolate molten cakes I made, no one ate more than one rib, but almost everyone cleaned their plates.  Even ate the peas.  I’m mildly apologetic about those.  Timing ran short and I didn’t have time to run to the store to grab a fresh vegetable.  I’d wanted to serve a spinach salad, especially since Fresh Express [2] just sent me like a million free salad coupons.  But for some reason, I’ve spent about 4 hours waiting in traffic this weekend.  Could that many people possibly be going to the fair? I’m headed tonight so I’ll let you know.

I also wanted to try the polenta base with a Port Salut and Montasio cheese so I’ll be trying that later this week.   You can also make them with blue cheese or a parmesan or probably fontina, but the cream cheese was yummy.  Really surprisingly delicious for me.

All of my food idols recommend cooking with as nice a wine as you would drink, if not nicer.  I’ll admit, I don’t do that.  This recipe was made with Black Box [3] wine and a part of an already opened bottle of Bogle Cabernet. [4] I do drink box wine.  I like it.  It takes up less room in both the grocery cart and the recycling bin than the equivalent 4 bottles of wine.  It’s cheap.  It doesn’t compare to a $50 bottle of Cab, but I can’t really afford those anyway.  Now the already opened for a couple days of Bogle?  I probably wouldn’t drink that.  That’s another bonus to the box.  It stays fresh.  Once a red wine has been opened, I tend to think of it as expired.  I tried the Bogle before I cooked with it and though it tasted a little vinegary.  Not horrible, but not preferable either.  Cory thought it was fine, but I’m never quite sure if he’s telling me the truth or if he just didn’t want me to waste that bottle and open another bottle.  Either way, it didn’t make one bit of difference in the sauce.  The sauce was divine.  So good that I’m thinking about eating it again.  For breakfast.  So the moral of the story is, I don’t know who is right on the mandatory quality of wine for cooking.  I’d say no to using a big jug of red table wine, but that’s mainly because I don’t really like that flavor to begin with.  But I think I’d still consider it sacrilege to cook with a $30+ bottle.

Use your thumb and forefinger to strip all the leaves from the rosemary stems.  Chop leaves into smaller pieces with a sharp knife.  Rub beef ribs with the rosemary, then sprinkle with the ground thyme leaves from a shaker top spice jar.  Next, season with kosher salt and pepper.  Heat a heavy bottomed stock pot or dutch oven over medium high heat.  Add olive oil let warm 1 minute, then add 4-5 of the ribs so they can sit in a single layer.  Turn the heat up to high and brown ribs on all sides. When thoroughly browned, remove to a plate and continue until all ribs are browned.

Preheat oven to 375.  Pour any fat from stock pot, than add wine, consomme, and water and bring to a simmer.  Add ribs and any juices from plate, cover and put in the oven.  Cook for two hours.

Remove stock pot from oven and use a large shallow spoon to skim any fat from the surface of the liquid.  (Up to this point you can do a day in advance – reheat on the stovetop to a simmer, then continue.)  Remove the ribs to a bowl and cover tightly to keep warm.  Turn heat on stock pot to high and boil sauce until reduced to about a third of the volume.  In a small bowl, use a fork to mash the softened butter and flour to a paste.  Add to stock and whisk furiously to combine.  Continue heating until thickened – about five minutes.  Serve ribs over polenta then spoon sauce over both.  Happy Eating!

I used Elise’s recipe [5] from Simply Recipes with a minor adjustment.  I’d say this recipe serves about 6 – maybe 7.  I used a 5:1 water to polenta ratio instead of the written 4:1.  To stir in the cream cheese with ease, I’d suggest having your cream cheese at room temperature, then adding it to your pan, covering it with a mound of warm polenta, cover the pan and walk away for 5 minutes.  Then come back and it’s a lot easier to stir.  Yum.