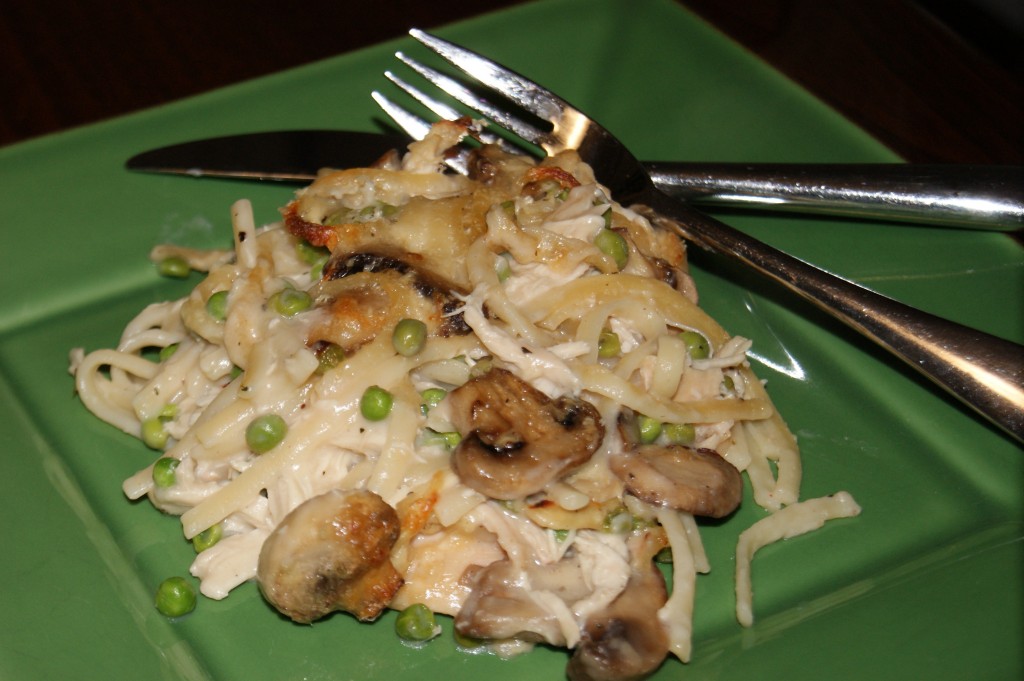 Blasted tech support.  I spent the whole day yesterday trying to get this post onto my site.  Someone asked me for a chicken tetrazzini recipe.  I can’t remember who it was, SMIL perhaps?  Someone else?  I haven’t made this in ages, so it took me awhile to track it down.  I don’t think I’ve attempted much in the way of casseroles since I was working in an office job six and a half years ago.

Yesterday I was migrating my website to a different server to correct the interminable slowness my site has been experiencing.  The first tech support call was great.  The second guy is responsible for the rampant hostility toward computer guys everywhere.  You know like the Nick Burns computer guy skit [1] from Saturday Night Live.  I used to be Nick Burns – well hopefully I was less of a jerkhole, but that was my job.  At the end of the day, the site has been migrated and from my end all the issues seem resolved.  Please let me know if you continue to experience any time outs or slowness, and I’ll try to keep traceroutes, ping tests, and packet loss out of casual conversation.

I really was trying to be reasonable with the chicken tetrazzini.  I planned to make one for dinner and one for the freezer.  Found the recipe, then completely abandoned any potential for taking the easy road.  Cause I’m all from scratch, y’all.  Don’t feel compelled to fall victim to my insanity.  If you do, I recommend this as a Sunday project if you’re a working person or at least as a part of a larger meal plan.

My dear friend, Elizabeth, tried some Oprah meal planning awhile back.  In my memory it involved something like buying two rotisserie chickens, shredding them, then making four meals from the bounty.  I can’t remember much other than I don’t think she was wowed by the results.  My problem is we don’t really eat dark meat, so rotisseries don’t really provide a lot of shredded chicken.  Many things in cooking don’t translate into economies of scale but shredding chicken does.  No need to go all crazy and roast first, then boil the chicken like I did.  I was suffering from existential angst on Monday, forgive me.  I’ve been boiling split breasts for chicken soup for years with wonderful results, the extra roasting is so *not* necessary.  In any case, if you want to shred your own chicken, just get a large pot and do a bunch – like 8 or 10 large split breasts.  Then you can have shredded chicken and broth for Chicken and Goat Cheese Enchiladas [2] or Chicken Stuffed Fried Avocados [3] or Mediterranean Penne  [4]or Chicken Salad or something of your very own creation.

makes 2 casseroles, each having about 5-6 servings

(Martha uses the shredded meat from a rotisserie chicken, if you go that route you’ll also need 2 c. of chicken broth)

In a large pot, cover split breasts with water, then add 2 teaspoons of salt and 16 turns fresh ground pepper.  Bring to a boil, then reduce heat to a simmer.  Simmer for about an hour, then remove chicken to a bowl.  Using a two bowl system, remove the skin and bones from the split breasts with two forks, then move your chicken to clean bowl and shred.  Repeat until you’ve shredded all your chicken.  Reserve 2 cups of chicken broth.

In a heavy bottomed skillet over medium-high heat, melt 2 tablespoons of butter, then add sliced mushrooms.  Season mushrooms generously with kosher salt and fresh ground pepper.  I sprinkle the whole surface, but you can use approx 1/2 teaspoons of salt as a guide.  Increase heat to high to brown mushrooms, stirring occasionally.  Wait for mushrooms to release all their water, then continue over high heat until nicely browned.  Remove mushrooms to a bowl.

Meanwhile bring a large pot of salted water to a bowl.  Break linguine in half, then cook approx nine minutes until just slightly less than al dente.  Drain.

In the same skillet used to brown the mushrooms, melt remaining 4 tablespoons of butter, then add flour, stir, and brown for 2 minutes.  Add milk while whisking furiously, then add wine and chicken broth.  Bring to a boil, then continue to cook over medium heat for 3 more minutes.  Whisk every 30 seconds or so.  Add a teaspoon of salt and 20 turns of fresh ground pepper, then 2 cups of the grated parmesan and the thyme.  Stir to combine, then adjust seasonings to taste.  This is the easiest place to mess up the recipe!  Be sure to season your sauce to taste.  The pasta, the chicken, and the peas are all pretty bland – all the flavor comes from the sauce!

In the now empty pasta pan, combine pasta, shredded chicken, browned mushrooms, peas, and sauce.  Stir until thoroughly coated.  Pour into two 8×8 glass pans.  Top with remaining cup of Parmesan.  Cover one pan with Saran wrap, then press down on casserole to create an airtight seal.  Freeze for up to two months.  Bake other casserole for 30 minutes at 400, until bubbly.  In full disclosure, I don’t use my freezer very often.  I’m not entirely sure what will happen when I cook the frozen one, but Martha says it’s freezer friendly so I believe her.  I’m guessing to thaw it in the fridge the day before, then cook it covered at 400 (30 min?), then uncovered  another 15-20 for browning.  I’ll let you know when I cook mine!