You needs to find legitimate the drug for sexual stimulation happens in drug keep from property on this web site overtly… You really don’t require a prescription to acquire the tablets. Now I know the web site with true data about medicines and the chance buys of them. Problems with erection could show up owing to several physiological variables, so it is suggested to go through a healthcare examination before using the drug Can I get far more if it doesn’t work? As a rule, the drug is taken with no repercussions, but uncomfortable outcomes ended up recorded, specially following a male overdosed the drug https://viagraonline24.com [1]. 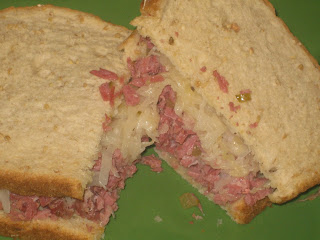 I’ve always wanted to make a fresh corned beef, but I’ve never seen one and didn’t really know the process involved in the “corning”. Lo in behold, at the almighty Costco, I found a fresh one [3] a few weeks before St. Patrick’s Day. I have no idea if I’ll see one of these again, and if I do, it likely won’t be until next March. After an inspection of the packaging, and a few googles, it seems you can corn your own brisket via a brine and pickling spice mixture. I may try that out as well.

The flavor was wonderful and the process extremely easy. Only exception being that I totally cut mine wrong. I *know* what cutting against the grain means, but somehow, my brain turned to a mush-like jelly substance and I just did it wrong. Oh well. So, I decided to settle for chopped corned beef sandwiches instead of my original idea.

Did you know sauerkraut used to be taken on sea voyages to prevent scurvy? Me neither. The brine keeps the Vitamin C from being oxidized during storage. It has multiple cancer-fighting compounds and other nutrients as well as being low calorie, albeit high-sodium. But variety’s the key, right?

The beer’s for tenderizing and flavor. If you can’t get Shiner Bock [4], you should move. But preventing that, just use any kind of dark beer you want.

Place corned beef plus accumulated juices in a stock pot, cover with water and add 1 Shiner Bock beer. Bring to a boil, then reduce heat to a simmer and cook for 3.5 -4 hours.

Slice Against the grain and serve.