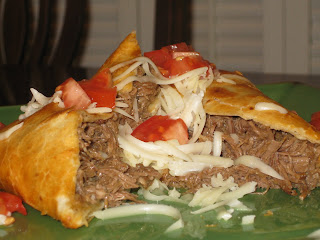 This chimichanga recipe came from my mother, inspired by their life in Arizona during my dad’s PhD. I don’t think I’ve really altered it over time, but feel free to comment, Mom, if you feel I missed your essence.

Mole is a Mexican condiment or sauce base. People have unbelievably strong opinions on mole when you mention it. For most, mole = gross. That said, where I probably wouldn’t order a mole recipe in a restaurant, it adds a lot of depth to this dish without overwhelming. In fact, no one has ever tasted these chimichangas and gone, “Oh mole, gee.” Anyway, it can be tricky to find, though I never had any problem in Austin. If you live in Dallas, send me an email, I can tell you exactly which grocery’s carry it. Or get it from amazon [2]. Amazon is also the only place I can still find my favorite pickles [3]. Well, the Piggly Wiggly probably still ships them, but half their case was broken every time I ordered. If you’re on the fence, think about it like ordering in a Thai restaurant. Even though I cook tons, I still have a hard time imagining from an ingredient list what a Thai Dish is going to taste like. If you’re interested in Thai, go to the master [4], my friend Jam in Austin.

Season chuck roast with salt, pepper, and paprika. Then coat with flour, and shake off excess. Heat olive oil on medium high heat in a 6 qt stock pot. Brown roast thoroughly on all sides. Cover with water, just to the top of roast then put on lid and continue to cook on medium high for 3.5 hours or move to a 350 degree oven.

Remove roast from pot to a separate bowl and shred meat, removing any remaining fat or gristly bits. Season with cumin and onion powder. Add two ladles of broth. In a cup, combine mole with another ladle of broth, stir til smooth then add to meat mixture and stir. Let sit at least 30 minutes, up to overnight in fridge.

Microwave tortillas on a plate covered with a damp towel or paper towel for 30-45 seconds to prevent tearing. Spoon meat mixture then place in center of tortilla. Fold sides over, then seal with egg to form a packet.

Heat 3/4 of an inch of oil in a saute pan, and place packets two at a time in oil, flipping once, to crisp and gently brown.

Serve with shredded cheese, chopped tomatoes, salsa, sour cream, and guacamole if you have it.