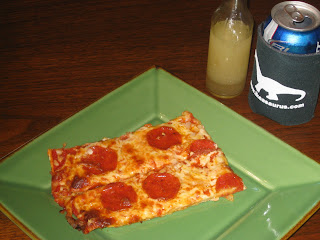 [1]I grew up near the best pizza restaurant in the the free world. Agatucci’s [2] is unlike any other pizza I’ve ever eaten and has such a place in my heart, I’ve regularly considered moving back to the midwest just so I could eat it more frequently. I periodically have bursts of intense homesickness and have to plan a trip all brought forth from just thinking about this pizza. I took seriously amateur dance and gymnastics across the street as a kid and my best friend’s grandmother lived in the neighborhood behind the restaurant. It is such a place of memories for me, it brings tears to my eyes.
If you clicked through to that link for Agatucci’s above, you no doubt read the restaurant has been handed down between four generations of sons. What lucky sons! I know restaurants can be all-consuming of your time, energy, and resources, but I envy anyone who has a “family business.” Let alone in food!
I’m going to try and go with a two picture method today to point out some unique characteristics of this style of pizza. Please try to ignore my 10 million year old oven in the background. One day, a gourmet kitchen and I will come together in bliss. And yes, I broke my oven thermometer in the pizza making process, hence its disheveled appearance in the background. My oven has a mind of its own and suddenly started heating 35-45 degrees hotter than the setting this year. 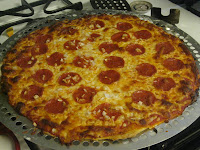 [3]So key items to note include: toppings go nearly edge to edge, this crust is so thin, the pizza is cut in small rectangles instead of triangles, the tiger sauce in the first picture, and the baking apparatus. I used a yeastless dough recipe, cause in this style you really don’t want your crust rising at all. I’ve no idea if this is how Agatucci’s does it, it’s just my attempt at recreation of greatness. I was pleased with the consistency of the dough and the texture. I mentioned last week that I’d asked Agatucci’s how they baked their pizza and they’d told me no pan just direct in the oven. Well that wouldn’t work with my oven rack so I went in search of the pizza disc you see here. Those holes go all the way through, providing more direct heat to the crust. I’m not sure if I think it was better or not, so next time I am also going to try one on a pizza stone to compare textures. I had a hard time figuring out how to move my paper-thin rolled pizza onto the 16-inch disc, so I wound up doing some final rolling on the disc, which resulted in little hole dents in the bottom of my crust.
I tried rolling on wax paper, but the dang paper kept getting folded and torn. I wasn’t sure how to move it direct from the counter, so I didn’t go that route. What I think would actually work best would be a large silicone sheet the size of your disc that you could roll on, then pick up and flip your crust onto the surface. I guess maybe that’s the theory with the pizza peels [4], that you flip it and drop it, I had never used one though and was imagining trying to slide off the pizza and thinking that will never work! I would think a large cutting board would work as well.
My sauce could have been zippier, but wasn’t bad. I’m thinking definitely more garlic and possibly some kind of vinegar? I’ll update it next time I try this. The cheese was definitely not quite right. In my research, I came across a kind of cheese called provel, which is used in St. Louis style pizza, specifically Imo’s [5]. It’s a blend of cheddar, swiss, and provolone. My sister thought it was Velveeta, and apparently, she’s not the only one [6]. I’ve had Imo’s and I just don’t remember it making a big impression. But the cheese is consistently described as tangy, so I was wondering what a blend of mozzarella and swiss might do for my pizza? Something to try.
I meant to make my own sausage topping for this pizza but the process and research became all consuming and my husband over-ruled me and went out and bought pepperoni. So made the crust, topped to edge with sauce, topped to edge with mozzarella, then added pepperonis and a sprinkling of white onion. Serve topped with the Tiger Sauce, a garlic flavored vinaigrette purchased at Agatucci’s. You could probably call them and they’d mail it to you!
Crust:
1 3/4 c. all-purpose flour
1/2 tsp salt
3/4 tsp baking powder
1 1/2 tsp olive oil
1 1/2 tsp dark corn syrup
3/8 c. water
Mix all ingredients until thouroghly combined, shape into a ball and roll out until paper thin.
Sauce:
28 oz can puree tomatoes
14 oz drained petite diced tomatoes
1 tbsp green bell pepper, finely chopped
2 tbsp yellow onion, finely chopped
1 clove garlic, minced
1 tsp thyme
1 tsp oregano
salt and pepper
Put all ingredients for sauce in food processor and puree until smooth. Pour into saucepan and heat on lowest heat for 15 minutes. Cool before using.