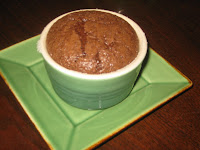 [1]
I started making this chocolate souffle recipe recently and it has jumped to my new favorite desert. I’m not entirely satisfied with this picture as my presentation so I’m going to remake this weekend and rephotograph for you. The key to souffles is all in the egg whites. I was trying to make this version while attempting to do bedtime for my two preschoolers. I’m not even sure if that’s the correct terminology for my kids as one technically isn’t old enough for preschool, but they’re bigger than toddlers.

Anyway, our current bedtime routine looks something like, bath, jammies, books, long discussion over which room and which bed(s) they are going to sleep in, me beginning to lose my temper, finally tucking in somewhere, with one extremely picky over proper blanket placement. Then the bigger one talks to the little one, or knocks on the wall or something, so the little one comes running out to “announce” this irritation, an average of 3-5 times. Anyway, it’s pretty chaotic. So that’s my backstory for my kind-of screwups on this souffle.

Souffle’s have a reputation for being difficult and apt to fall and a whole lot of hassle. This one is very simple and has only 3 real ingredients. I’m not a huge dessert person, but I do like chocolate, and I like to make things for other people who really like dessert. This souffle tasted good, and it did rise, even if not to quite as beautiful a presentation as I usually have. But everything that went wrong, was because of my egg whites, which I knew were totally off so considering, I think this was a really great result.

When attempting to beat egg whites to stiff peaks, it works best to have your eggs at room temperature. I succeeded there – though usually that’s the part I screw up, and it has always turned out fine anyway. I started out wrong by absentmindedly leaving the flat beater [2] on my Kitchen Aid instead of my wire whip [3]. You want the wire whip because the whole goal is to incorporate enough air into the egg whites to form first the soft peaks, then later the stiff peaks. Then I didn’t notice until I’d been beating the eggs for so long they’d already been abused and weren’t savable- really they’d passed on to that ribbony texture that’s kind of a yellow-y color instead of fluffy white clouds. So I turned off my kitchen aid and did what I could with my regular old wire whisk, like I should have in the first place, and got them as fluffy as I could.

I should have just started over with new eggs, but sadly, those were the last four eggs in my fridge. I thought about calling my neighbor, but she’s moving (I’ll miss you Genny!) and I hate bothering people after dark. Anyway, moral of the story, souffle’s aren’t as finicky as you may have believed, cause it all worked out fine – or edible at least.

After I made altered to this version of the recipe I ran the nutrition information for a friend once, so if anyone wants it….

Heat oven to 375 degrees. Butter 4 ramekins, then sprinkle with sugar, shaking out excess. In a double boiler, melt chocolate in top portion over barely simmering water. Stir occasionally, until smooth. Remove from heat, add egg yolks, stir, mixture will look thickened. Beat egg whites plus a pinch of salt on medium speed until it forms soft peaks. Add remaining sugar, slowly while continuing to beat, then increase speed. Beat until stiff peaks are formed. Stir a large spoonful of whites into chocolate mixture, then gently fold in remaining whites.

Spoon into prepared ramekins, then run your thumb around the inside edge of your ramekin (helps in rise process). Bake in middle of oven on a cookie sheet until risen and crusted, but center still jiggles, about 15 minutes, but I start checking by the minute at 12 minutes. Enjoy!