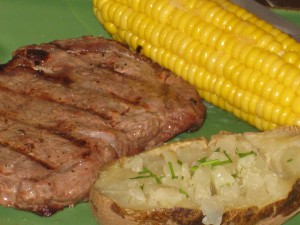 I’m likely going to incite riots with this post but it’s truly just a matter of opinion.  And largely I think that opinion is formed by where/how you grew up.  I grew up in the midwest, by way of Alabama,  and I’ve now lived in Texas nearly half my life.  I’ve really loved everywhere I’ve lived, and I don’t feel strongly about the south, the midwest, or the great state of Texas being better or worse than the rest.  That’s likely a part of my personality, I get very attached to people and places and for the most part, I’m a pretty jolly person.

Anyhow, steaks taste COMPLETELY different in differnt parts of the country.  It’s due to what they’re fed.  In the midwest, we grow a ton of corn and soybeans and our weather is cruddier a much larger portion of the year making exclusively grass fed beef difficult and very expensive.  All my friends from ranching families in Texas are going to HATE me now, but I totally prefer corn fed beef.  I know that grass fed is healthier and more environmentally sustainable, but it just doesn’t taste as good.  To me.  I know a huge number of women who don’t eat red meat.  Mostly it’s for health reasons, but I have a sneaking suspicion it also could be that they’ve just never had a REALLY GOOD steak.  It seems like 9 out of 10 steaks I buy I’m disappointed in, unless I buy really expensive meat from a specialty butcher.  For whatever reason, I just don’t ever think, well that was a mediocre chicken breast or gee, that pork tenderloin was truly inferior, but with beef it happens to me all the time, except at home.  And maybe that’s just because my dad is better at buying steaks than I am.

When my husband brought home corn on the cob – so NOT his favorite vegetable, I was touched.  And decided to hell with it.  And we ate nothing green for dinner on Tuesday, unless you count those few chives on the potato, which I know don’t count.  We’ve been lucky so far, and I’m not feeding anyone on a daily basis who has a cholesterol or high blood pressure or a weight problem.  I know, I know, I keep this up and we will.  But really 1 meal isn’t going to be the death of us.  And we all love leafy green vegetables so we eat plenty of them.  If you read all of this week’s posts, you’re probably going to think I’ve lost my dang mind that I’ve eaten, steak, gravy, stuffing and ramen – then there was the day the kids ate nothing but popsicles.   So sue me.  I just don’t have the energy to become a true, only healthy whole foods eating person.  We eat pretty well, we don’t eat McDonald’s everyday, and to me food is about enjoyment.  Someone said to me once, “I don’t live to eat, I eat to live.”  I think I may live to eat. and cook.  My life is all about enjoying things, and I firmly believe – the purpose of life is to be happy.

The steak seasoning we use is from Cutters Cross [1], I talked about their Cajun spice here [2].   If you run out and buy it, I do want to note to use it sparingly the first time, it can be extremely salty if you get carried away, but the flavor is great.  I feel silly writing a recipe for grilling steaks since it’s not really a recipe or for a baked potato.  And on the off chance you’ve never made corn on the cob, Boil a large pot of water, throw in your corn (after removing the leaves and silks) and boil for 8 minutes.