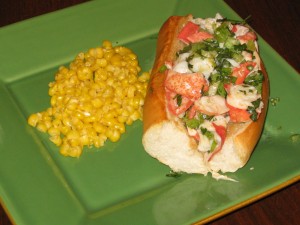 Get out of dodge.  I’ve finally cooked fresh live lobsters!  This has been a want and a dream of mine for as long as I can remember.  There’s something so pure, raw, and unadulterated about taking a live ingredient and making it yours from start to finish.  It’s completely primal.  Now I’m not a hunter, and as I’ve mentioned before [1] a pacifist by nature.  So the idea of boiling a live lobster is somewhat repellent, but also feels very natural, since I plan to use each and every last part of the lobster.  I’m embarking on lobster stock tomorrow, straight on my way to lobster bisque, which I hope! will mimic an iota of the culinary masterpiece of The Country Club of Peoria.  I know.  Peoria, really?  As in the small city in the heart of Illinois, miles away from any oceans?  Yep.  That one.  That’s my parents’ country club, and I’d just about give an arm for their recipe to lobster bisque, except then I’d have more trouble holding babies, and I love babies.  It’s more amazing than anywhere else.  Bold statement, I know.  Yes.  I get homesick.  Yes, I’m a tad nostalgic for a simpler life.  That said.  Their Lobster Bisque will change your life.  And if you haven’t been down Grandview Drive, or seen the bluff over the river, well you flat missed some of the best parts of the midwest.

Lobster and I, we have a unique kinship.  My best friend Lisa and I once ate at Truluck’s in Austin (when we totally couldn’t afford it) where we attempted to order two pound lobsters each.  Sadly, they were out of two pound lobsters, so when they offered two 1-pound lobsters for the same price, we jumped on it.  Even though that meant, we EACH HAD TWO LOBSTERS on our plate.  Every time I’ve gone to Boston (yep all two of them) I hopped straight for the lobster.  When restaurant.com sends me an email, I’m always secretly coveting the Lobster Gram [2].  At the Park City Farmer’s Market, I eyed the fresh Maine Lobster booth each week.  I even have a thing for Cider House Rules.  Enough said, point made.

The fabulous thing about having dear sisters is you can rope them into all sorts of stuff you could never get away with on your own.  Kind of like this blog, I’ve gotten a kitchen and grocery budget hall pass ever since I started writing.  Ahem.  Please no one tell my husband I’m not really making money!  It’s all such a fabulous dream!  So when I arrived home to a Gourmet magazine with Lobster Rolls on the cover, *NOT* containing mayonnaise, it was a sign from the gods.  I called up my sweet little sister and announced, we’re making lobsters, how many should I order?  And of course, sweet little sister obliged as she is compelled to do, and a life long dream was fulfilled.

So here’s what they looked like, flown in fresh today to Rex’s Seafood Market [3].

And of course, the fishmonger is all, “Dude, you ladies are headed straight home, right?  Cause you know you can’t leave live lobsters in a box in your trunk in 100 degree weather.”  And I’m all, “Shhhh.yeah   of course I wasn’t planning on popping into Target first for an extra large pot.  Like I’d be that stupid.”  Ahem.  Again.  I was going to be fast.  Maybe even leave Amelia in the car with the air conditioning running.  Anyhow, we went straight home and made do with the pans I have on hand.

So then we get the water boiling, salted it and were ready to hit the ground running.  At first, Amelia scoffed at me that I was using tongs to transfer the lobsters to the pot.  Cause apparently on tv, they always use their hands.  She figured out why that was a bad plan on lobster #3 when she nearly scalded herself with boiling water and came close to taking out a too-close-in-proximity computer after the lobster threw a conniption fit when approaching the pot.  This is how the guys looked in the pot.  Note the color and the steam.  Ahh…

The rest of the process was pretty painless.  And Amelia definitely can take on a job as lobster meat excavator, should you so be looking for one.  Her years of hitting every crawfish boil in a 50 mile radius have certainly paid off.  You need champagne uncorked, I’m your gal.  You need lobster de-shelled in the most efficient and effective manner, go for the younger sister.  It was an amazing day.  And we’re obsessed with the results.

If you shy away from shellfish due to to sometimes salt-watery flavor, go for fresh, go for live, and make the most of what you’ve paid for.  I can’t imagine you’ll be disappointed.

The recipe for these Lobster Rolls came from Gourmet [4] magazine.  If you take the magazine, the photo is featured on the cover of their July 2009 issue.  If you don’t, please subscribe.  Your culinary appetite will be expanded and invigorated.  Please click here [4] to their site to see the recipe.  The only changes I made, were my total inability to use hot dog buns, so I used french bread sandwich rolls, with a v-pattern cut from the top to make them open, and I cooked my 1.5lb lobsters 10 minutes, because I always prefer seafood well done.  Sweet husband loved these, but felt on future endeavors, I could add zip, so I’d probably go with more lemon, adding capers, then letting the mixture chill for about 2 hours before serving.  It was fabulous.  Couldn’t recommend this more!