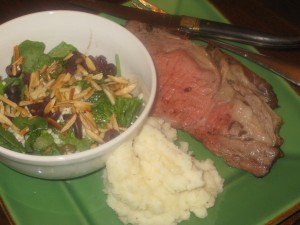 Making a standing rib roast in Texas is July is borderline insanity, but it’s one of my favorite things to eat/cook so I do it anyway.  Apparently it’s one of my 2 year old son’s as well since he knocked back at least a pound of beef all on his own.  Plus he likes end cuts!  A whole standing rib roasts contains 7 ribs – ribs numbers 6-12.  The smaller end – closer to the loin the ribs 9-12 are generally considered more tender and a better cut of meat.  A rib usually serves two, so a four rib roast could serve 8 adults, unless they eat like Quentin… or me on prime rib night. 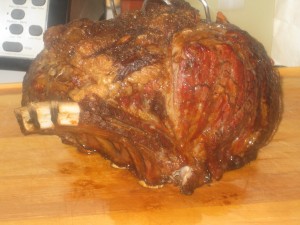 One of the most important things in preparing large roasts is bringing the roast closer to room temperature before cooking.  I bring my roasts out of the refrigerator about 2 hours before cooking.  Other than that, roasts are pretty easy to prepare.

Mashed potatoes are also one of my favorite foods.  I took the picture at the top before we topped them with our au jus – which made them even better.  My recipe for mashed potatoes can be found here [1], but I did want to include a photo of the potato ricer just in case you’ve never seen one in action.  They are fabulous tools! 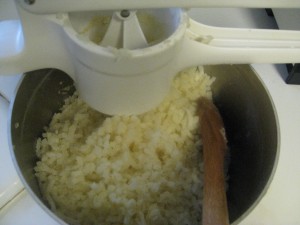 Bring roast to room temperature.  Preheat oven to 500.  Season liberally with salt, pepper, and paprika.  Cook roast at 500 for 15 minutes, then reduce heat to 325.  Cook about 15 minutes per pound, until meat reaches 135 degrees for medium rare.  Let rest 15 minutes, then cut down towards bone, then down bone to release meat.

Pour off all fat from roasting pan, then add 2 cups water to pan drippings to create your au jus, scraping up any brown bits.  Add any meat juices left from slicing meat, bring to a boil, then reduce two minutes.  Season to taste and serve with prime rib for dipping.