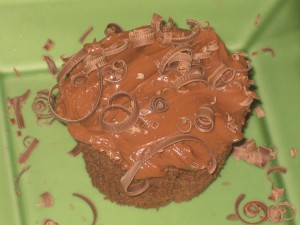 I’ve started several chocolate cupcakes posts this year, only to later decide the food wasn’t really blog worthy.  These turned out extremely cute for the preschool craft, were quite good, and the frosting glided on gently and attractively, something I’ve been struggling with.  That said, I’m not totally sold on this as the ultimate chocolate cupcake recipe either.  So I’m still looking.  If you have a from scratch chocolate cupcake or frosting recipe – send it my way lane@dinnerandconversation.com – I’d love to try it out!    I’m looking for a light and fluffy cake consistency and a very chocolaty frosting that ices beautifully and easily.  The answer may well be that I should stick to molten chocolate cakes [1], that I don’t actually like cupcakes very much, but I’m going to keep experimenting for the time being. 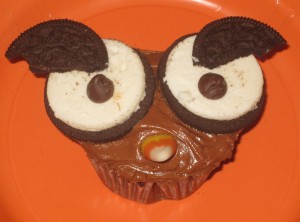 These chocolate cupcakes were destined as decorating fodder for the preschool Fall Festival party.  My mom gave me the idea from a luncheon she’d been to recently, so Thanks, Mom!  The four year olds did very well with the decorating process, especially the girls.  After that party, I did scrap the idea for my son’s older 2’s/young 3’s class.   I’m pretty sure their Owls would have wound up frighteningly Dali-esque.  They likely would have loved receiving a pre-decorated owl of their very own.  Truth be told, I just didn’t have another 20 cupcakes in me, so they had to survive with pumpkin bread alone.  That’s what happens when you’re not the firstborn.  In retrospect, perhaps mine looks more like a mouse or a bat or some other indistinguishable creature.  Arts and crafts have never been my strong suit.  That’s why we’ll be mixing dry soup gifts at the Thanksgiving parties.  I’m really much better with food.

Use paper liners to fill 20 cupcake tins.  Preheat oven to 375.  Combine cocoa and boiling water, then stir until smooth.  Reserve for later.

In stand mixer, cream butter and sugar with flat beater.  Cream until totally combined and color is very light.  Add eggs, one at a time and beat until smooth, being sure to scrape sides of bowl.  Add vanilla.  Reduce mixing speed to low and add the dry ingredients a third at a time.  Mix until just combined then add cooled liquid cocoa and stir with a spoon until smooth.

Spoon mixture evenly into cupcake liners.  Bake 18 minutes – or until center top springs back to touch and wooden toothpick can be pulled out clean.

In the top portion of a double boiler, place the chopped chocolate over barely simmering water.  Let cook until you see chocolate beginning to melt, then stir occasionally until chocolate is a uniform consistency.  Set aside.

In a stand mixer, beat the butter with a flat beater until smooth and light, add powdered sugar and mix thoroughly.  Add heavy cream and vanilla, beat another minute.  Scoop in cooled melted chocolate with a spatula then stir until you have a consistent color.  Frost cooled cupcakes with a spatula.

Split Oreos in half so stuffing is all on one side of cookie.  Place Oreos stuffing side up side by side on the top half of cupcake.  Place one chocolate chip on each Oreo background for eyes.  Break one leftover plain Oreo in half and use one half to fashion each eyebrows.  Place candy corn for beak.