When I moved to the great state of Texas, I came from deep in the midwest, with southern roots and southern parents, but absolutely no idea what life had in store for me.  My parents always wanted me to go to school in the south, they would wind up here , dang it, and so would I.  I met my husband the very first week of college at the University of Texas.  He didn’t know he’d become my husband, but I did.  I grew up with a mind for fairy tales and princes and happy endings, not because I was taught to, but on my own because, seriously I was born this way.  Life should be roses and bridge clubs.  I’ve wanted to do a million things in this world, but everything in my dreams had a big family at it’s center.

It’s easy to see now, that I sold my FIL (father-in-law) and SMIL well before I’d ever sold Cory on my merits.  You could never find a family to welcome me so readily as they did.  It’s like they’d been waiting for me for years and were so thrilled I showed up, I could do anything and always appear perfect in their eyes. 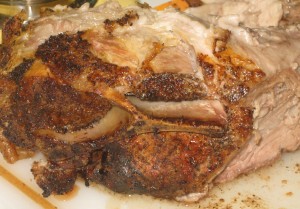 This recipe came from FIL, even though it’s not his exact method (my grill leaves much to be desired.)  He’s made it for us many times, and everyone loves it.  Thanks FIL for the great recipe, and I will be forever touched by the way that you accepted me so gracefully without question.

Lemon Pepper (my mother reads this website so I can’t use expletives.  plan for a jar and a half)

Preheat your oven to 300 degrees.  Rub the pork with the lemon pepper, then add some more.  Cory notes, take some more, then, just keep going.  Place the pork directly on the oven rack.  After an hour, place new potatoes in a 13×9 glass casserole, then spread underneath the pork to catch the drippings.  Let cook for about 3 more hours until an internal temp of 160.  Let rest 20 minutes then slice and serve.