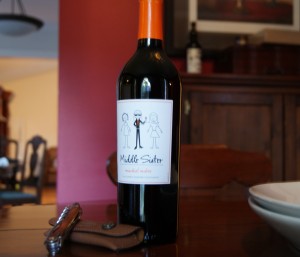 I wound up at Target this afternoon with two kids in tow, because I needed milk, wine, and maybe a new pair of jeans.  That’s a hard list to fill in one stop, but luckily for the disorganized of our generation we have Target.  The jeans didn’t happen.  Sadly, I can never understand the Target clothing department.  I see people out all the time looking sassy who claim their ensemble or a part of it came from Target, but when I peruse their clothing aisles, it all just looks sad and depressing.  More than likely that’s due to my severe hatred of clothes shopping and the whining child or two in tow, but I’m blaming it on the skinny jeans style.  For the love of God, will that trend please go away.  It’s killing me.  I’m sure you all are rocking it solidly, but every time I put on a pair I’m constantly looking over my shoulder – certain to hear my dad telling me to get back upstairs and put on some real pants.  And for some fool hardy reason the Gap has decided to “redesign” their tried and true Long and Leans [1], so I can’t just order the same old jeans online and skip this whole nightmare.

Anyhow, by the Wine aisle, I was feeling pretty harried.  Then as I was staring aimlessly at the selection wondering who in the world had organized it and why didn’t I recognize anything, I saw it.  Middle Sister [2] Mischief Maker [3] Cabernet Sauvignon.  Snappy graphic, Snappy Font. 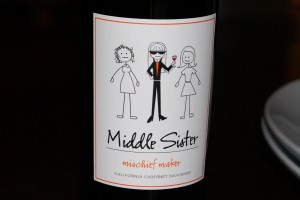 And I’m a middle sister and a mischief maker!  Now, normally, I never go for wines with clever names.  And even if it’s ridiculous, I know that the wine with the plainest label and the most beautiful script will taste better.  But I had to try this.  Frankly, my mood improved as soon as I purchased it.  Then I uncorked it and saw the website written on the cork and sat down to check it out.  Trust me.  If you, too, occasionally purchase a vitamin water [4] just to read the catchy phrase on the bottle, you must peruse this website.  It totally made me giggle.  As for the wine, I don’t feel I can fairly judge the complexity, because I’m drinking it with Cheetos.  Yep, that’s right I’m taking a very much needed two days off.  Don’t ask what the kids are eating because they just opened a giant Halloween care package from Aunt Chelsea and I’m pretty sure Q is on his 10th package of pop rocks.  That’s the beauty of cooking healthy, well rounded meals the bulk of the time; sometimes it’s okay to live on pop rocks and cheetos ; )

Maybe this is why I’m such a chameleon.  Perhaps it’s all a result of my birth order.

“Erin Wassum is one of the inspirations for Middle Sister Wines. Sandwiched between an older sister and younger brother, and therefore sheltered from the demands of either role, Erin was free to re-invent herself on a regular basis. From fashionista to social butterfly to flower child to happy rebel, Erin loves trying things on for size…”

So peruse their website and have a chuckle at the silliness of birth order, run to Target, grab a bottle, and cheers.